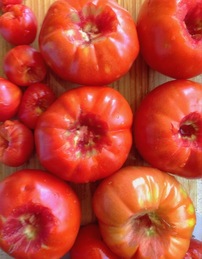 Fresh cored tomatoes
Fill up the sauce pot with water and bring to a boil.

While the water boils, fill the large glass mixing bowl with very cold water and enough ice to keep the water uncomfortably cold when you dunk your hand in it, but not so much that it looks like iceberg city.

When the water in the sauce pot boils, drop in a few tomatoes at a time. Let them sit for about a minute. The skins will start to peel.

Take cold tomatoes out ice water and the skins will peel off. Set them aside. Repeat until all tomatoes are peeled. 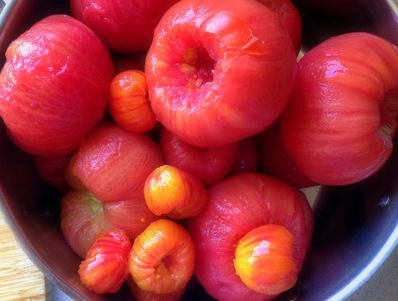 Hot tub, ice bath and ready for simmering
NOTE
It is very helpful to have a teenager or other assistant, but the cadence of tomato-into-boiling-water, tomato-into-ice-bath is manageable solo as well.

All the peeled tomatoes will look like those on the right.

At this point, you have two options.

#1 Dump all peeled tomatoes whole into a dutch over and mash the tomatoes with a potato peeler.

Add Hawaiian salt and simmer tomatoes for at least 90 minutes. Stir every so often so it doesn't stick to the bottom. I used a whisk to keep the sauce a consistent texture. Add about 1/4 cup red wine vinegar at the 90-minute mark. 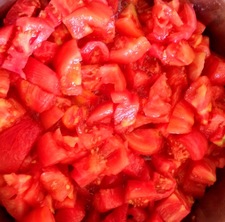 Let it go for 90 minutes or so
Let it simmer for about 10 more minutes and add salt or a bit more vinegar to your taste. Homemade tomato sauce starts out much more liquid-ey than store-bought sauce.

However, the longer that you let it simmer, the thicker it will get. And the flavor will get much more intense and tomato-ey.

Pour into freezer-proof containers. If you feel like doing more work, you can start to strain out the seeds, but I did not do this. Let cool completely and then freeze. I tried to parse it out into can-like amounts. Shelf life in the freezer in three months.

Be happy that you will have amazing spaghetti sauce, jambalaya or chili.