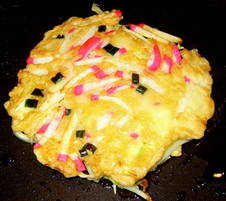 A recent addition, thanks to Japanese-language sensei (teacher). When we were practicing  she told me about okonomiyaki--Japanese not-for-breakfast pancakes. I had no idea what it was, but it sounded good. I must have done something right because when I first posted about it, my cousin, who lived in Japan, and a Canadian-Japanese friend, both gave it the thumbs-up.

I use organic pre-made Okonomiyaki mix from Nijiya Market. In the San Francisco Bay Area, this is available at some Safeway stores also. I had hoped to switch to a from-scratch version, but I've stuck to Japanese okonomiyaki Bisquik.

My Canadian-Japanese friend says he adds dried scallop powder, but this falls under the 'small pinches of obscure spices.' Plus, it is only available in Japan, where I do not live. 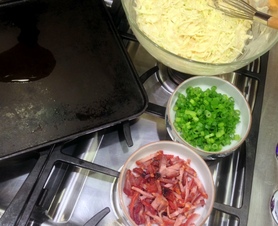 Mix together okonomiyaki mix, water and scrambled egg. Add shredded cabbage and mix well. The batter should be thick enough to cling to the cabbage, but not so thick that is becomes dough. If necessary, add a bit of water or dry mix.

Drizzle a bit of sesame oil into a non-stick pan or flat griddle. Drop in a handful of add-ins and saute a bit in the sesame oil, just until it gets warm. Shape add-ins into a flat circle and drop okonomiyaki batter/cabbage on top. It should be about 1/2" thickness. Let brown and flip. If necessary, cut the first one in half to get the timing of how long the middle takes to cook, then flip.

On the top of the pancake, spread a little mayonnaise on one side, then drizzle Bulldog sauce over. Add red ginger, nori or hana-katsuo to your taste.